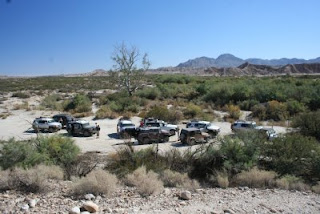 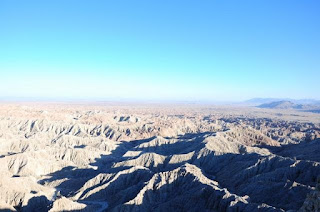 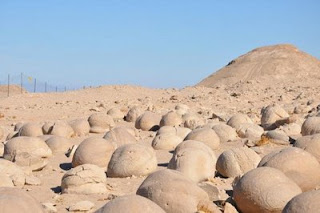 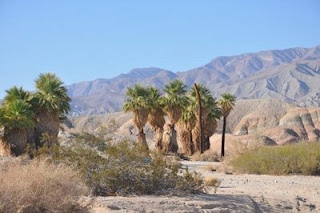 Well it turned out to be a great weekend. We left San Diego thursday night to head up into Coyote Canyon and camp at Sheep Canyon campground. My wife's brother followed along with his Toyota pickup loaded down with a couple dirtbikes. However, halfway up boulder alley, his clutch went out so I ended up towing him the rest of the way.

On friday we headed on back into town to set up camp at Palm Canyon group camp. I left my Jeep with him so he could pick up a new clutch while I rode along with a friend to lead the day's run.

The trail leading from Buttes Pass Rd to San Felipe Wash (aka The Slot) had a very steep sand hill along with some moderate rock crawling, however, most of the route was easy. (got stuck there once when my jeep was stock with no high-lift. There's also a narrow slot canyon that's fun to hike into. Heading into Ocotillo Wells from San Felipe Wash will allowed for some high-speed fun! We can play on Devil's Slide for a bit. Next, a rocky wash will greeted us on the way to the Pumpkin Patch along with some tight undulating hills. Taking us north was the Cross Over Trail which features steep climbs and tight turns. Its a fun drive with many alternate routes of varying difficulty. After driving a short distance on the Cross Over Trail we headed west back into the park through Arroyo Salado Wash, which will took us through impressive examples of the Borrego Badlands. Sandstone, claystone, and mudstone have trapped fossil life-forms for today's obsservant traveler to see.

Juan Bautista de Anza's historic 1770's expeditions crossed along this scenic route. Early European prospectors in the area quickly realized that water was nearly as valuable as gold. The Seventeen Palms mailbox along this trail seems to have evolved from those pioneering days. The water in the spring was unreliable, so travelers left extra water and notes for the next passer-by in large glass jars hiddin under the palms. The practice stuck and the "prospector's post office" is still there.

The historic Truckhaven Trail, completed in 1930, climbs in and out of the deep badland washes. Doc Beaty, an early settler, was instrumental in the road's creation, dragging a mule-drawn scraper through the badlands to the Truckhaven gas station to create the first rough road. It was not a route for speedy travel, and trucks and autos took their time weaving through the weathered landscape. In 1968, the Borrego-Salton Seaway (Hwy S22) was dedicated. This paved road follows Doc's road closely, and sectons of the old route remain. Since World War II, the old road has been popluar with 4WD folk who wish to sample the rugged badlands terrain rather than travel the faster blacktop. This section has some loose, eroded, low-traction climbs to negotiate. Highway S22 will took us back to Borrego Springs and Fonts Point.

On saturday was my Carrizo Badlands run. Vallicito Wash & Carrizo Creek- This route consist of a large, wide, sandy trail that intersects several other canyons and washes, such as Canyon Sin Nombre. The end of the wash takes one into Carrizo Creek, a narrow, marshy area. Wider rigs will find it slightly brushy, and the creek often flows along the surface. There is a maze of tracks once you exit the creek. Some lead to a couple of good sheltered campsites by a natural rock wall. The end of the trail takes you to the site of the old Carrizo Stage Station Site. Arroyo Tapiado/ Arroyo Seco Del Diablo Canyon- Arroyo Tapiado has the Mud Caves, a network of some 22 caves, some 1000' long and 80' high. Arroyo Seco Del Diablo (Spanish for "Devil's Dry Wash") lies in the midst of the Carrizo Badlands. This route has cut through the hardened sandstone concretions carried downstream from afar to create the deep-sided canyon this trail follows today. The loose and fragile walls of the canyon mean that rock and sand falls are common, and you are likely to have to climb over fallen debris. Sandy Fish Creek travels through the gap in Split Mountain, along a fault zone. Keep a careful eye out for the many fossilized mollusk shells to be found embedded in the wall and floor of the canyon.

On sunday we ran through Painted Gorge up to Carrizo Mountain. This Canyon gets its name from colorfull red, blue and green sections of stained sandstone blocks within it. The begining of the trail passes through Plaster City OHV Area into a wide open area. The graded road soon becomes a trail as it nears the sandy wash of Painted Gorge and quickly enters the canyon. Embedded rocks litter the wash, which eventually turns into a very narrow, rocky, loose shelf road as it nears the summit of Carrizo Mountain. The views of the Yuha Desert and Salton Sea along the trail and at the top are amazing! We can't wait for next year's BorregoFest!
Posted by John Graham at 9:13 PM No comments: