Tecolote Canyon is designated as a natural park, 6 miles in length, 1/4 to 1/2 mile wide, with a 2-mile tributary totaling just over 900 acres. Elevations range from sea level at the canyon mouth to 320 feet at the head of Tecolote Canyon. The canyon rim is between 315 and 400 feet above sea level. Being a suburban Natural Park, you'll see houses and apartment buildings, including the rather more attractive architecture of the University of San Diego (USD).  Along a good portion of the trail, you'll also be following high-tension power lines. Tecolote Canyon has a lot to offer, offering quick access to local residents and hikers alike. From its trails for hikers and mountain bikers, to the wildlife for avid nature watchers, and learning centers for students or enthusiast, Tecolote has something for everyone to enjoy.

For the goal-oriented, a hike up Tecolote Canyon might be frustrating because of a lack of distinct destinations and turnaround points. For families with small children, the first, flat mile of the canyon bottom is an easy way to go. The golf course clubhouse two miles out and a lovely tributary canyon at the 2.75-mile mark are two intermediate goals.

Dogged and die-hard hikers armed with a good city map can trek the length of Tecolote Canyon, a six-mile one-way journey, or a 12 mile round trip trek. Expect to find lots of poison oak and two major pedestrian challenges--crossings of Mt. Acadia and Balboa boulevards.

The trail starts at the Tecolote Nature Center at 5180 Tecolote Road off Morena Boulevard, San Diego.

The learning center may be small, but it has a lot of educational value. It has plenty of information on native animals and educational information regarding the California Native Americans. The park and nature center also provide study trips for classrooms and special events. In addition to variety of stuffed native wildlife, the center also has live native snakes on display. 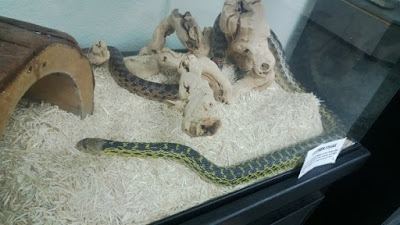 What's not to love about this serene, well-maintained scenic spread of land smack in the middle of an urban environment?  Entering by the nature center, the terrain is flat and well graded for the first mile or so.

One thing to note, if you don't like bees.  There are several large bushes on the first downhill section that attract bees like no other.  The bushes may seem to hum loudly as you pass.  The bees are not likely to bother you if you don't bother them, but you will notice the sound.

The main trail from the Nature Center runs east and then turns north to follow high-tension power lines along the canyon base and flank. This dual role as trail and power line utility access route means that the path here is, for the most part, a dirt road that passes at least one utility sub-station.

The benefit of this is that the trail/road is wide, well maintained and generally flat until well after the northward bend. The negative is that, well before this bend, you see the utility poles and soon hear the distinct crackle of high tension power lines. You're never far from this sound in the main canyon.

It is relatively quiet and peaceful for being stuck right in the middle of the city.  The golf course takes a good portion of the canyon unfortunately, but you can walk right beside the fence and around the eastern edge of it until it veers to the right and enters a tranquil oasis with very old oak trees and water.

I followed the path that ran along the fence on the edge of the golf course, but periodically converged with the access road along the power lines. Both routes are pretty steep and involved a lot of up and down. The scenery here may be lacking, but this could definitely make for a good cardio workout. You can do like I did and mix it up between the narrower path along the fence, which is a bit more level, and the steeper, wider, access road, but you’ll want to make sure you’re to the left as you approach the end of the golf course. The easiest route is to just stay along the fence as much as possible.

Crossing under one of the power lines,
with all the crackling ambiance that entails.

The photo doesn't do justice to the steepness of the route here.

Tecolote Creek, north of the golf course, can run to a depth of 6–8 feet during the rainy season. In the summertime, the creek is normally dry, except for runoff from the course greens. The creek empties into Mission Bay at the Pacific Passage side of Fiesta Island. The creek also contributes to the groundwater table in the lower end of the canyon.

The summit of Cowles Mountain can be seen in the distance.

It looks like I'll have to leave the trail for a bit as I approach Via Bello.

I go left on Via Bello for one block, then use the shoulder of Mt. Acadia Boulevard to get back to the bottom of Tecolote Canyon.

This part was kinda sketchy, as there's no sidewalk and cars sped past me. Hopefully, the construction of a trail skirting the golf course may make this awkward detour unnecessary.

It felt good to get back on the dirt!

There are a couple nice picnic spots here along Tecolote Creek.

Balboa Avenue presents the next obstacle. I crossed under the tunnel that carries the floodwaters of the creek. One could climb up the embankment and attempt to scurry across the busy lanes of traffic and over the center divider- a dangerous move at best.

Heading north up the canyon toward my turn-around point, North Clairmont Park.

Even though I was surrounded by urban development, this part of the canyon felt far removed from the hustle and bustle of the city.

The last climb before reaching the park.

North Clairmont Park. Maybe I should have made this a one-way 6 mile hike? Oh well, there's no stopping now.

I got a few odd looks from people as I refilled up my water bottles at the drinking fountain. What, they never seen a hiker before?

Time to head back.

Lots of poison oak to dodge along the trail.

Back down towards the golf course.

I was once again greeted by an abundance of wildflowers as I neared the visitor center. The sun as getting low when I reached my Jeep and finished my 12 mile trek.

Overview of my route through the canyon. 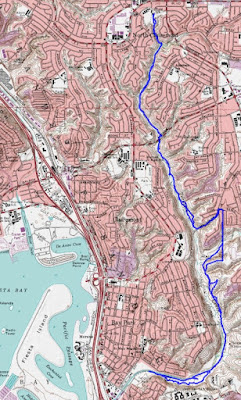 Work is ongoing to protect this open space from pollution and development and planting native plants to further complete the picture of the native state of the land. The park was dedicated on April 1, 1978 after being purchased by the City of San Diego.

In 1957, the city government planned to use Tecolote Canyon as a sanitary landfill; cattle had grazed there until 1953. This and other development plans were abandoned due to protests from residents of Linda Vista and Clairemont, which led to the Park Procedural Ordinance adopted by the San Diego City Council in 1969. The Tecolote Canyon Park District was initiated by the council in January 1971, then adopted in July 1974, both by a unanimous vote. After the land acquisition was completed, the dedication ceremony was held on April 1, 1978. 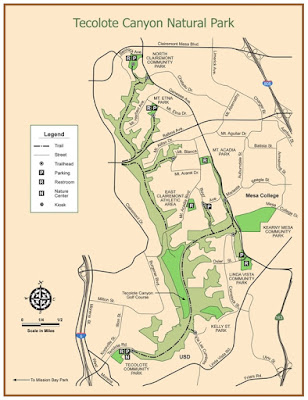