With four days off work at the end of December, I figured I'd get an early start on my 52 Hike Challenge for 2015 and head off into the wilds of Anza-Borrego Desert State Park. It had been about four years since I had last visited the upper reaches of Coyote Canyon, so I decided to hike through the riparian (wetlands adjacent to rivers and streams) areas of Upper and Middle Willows within the canyon. These areas can truly be described as "desert jungles." Three clusters of dense vegetation, known as Lower, Middle, and Upper Willows, are where the waters of Coyote Creek rise to the surface. These woodlands along the creek include not only thick stands of willow, but also California fan palms, cottonwood trees, mesquite, acacia, mule fat, and arrow weed. 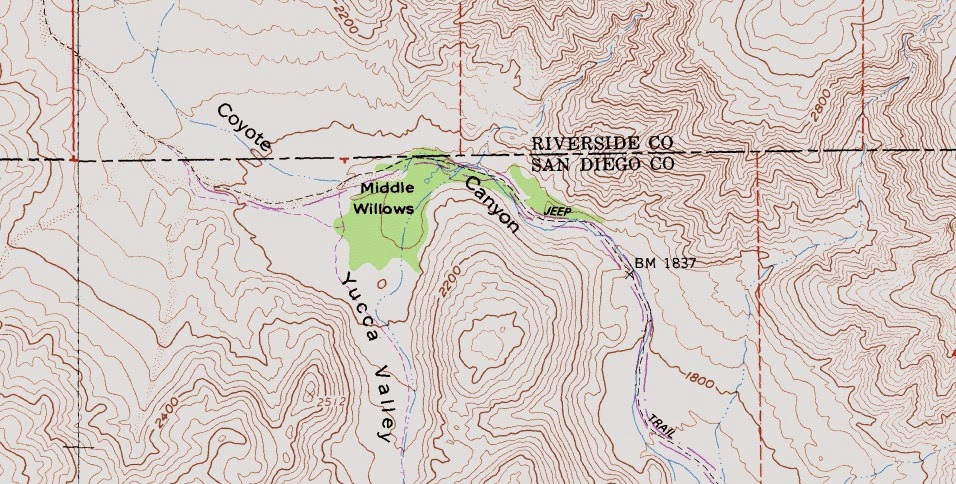 Coyote Canyon is the primary path of Coyote Creek, a meandering 35-mile monument to Anza-Borrego history and Mountain Cahuilla civilization. It offers challenges to backpackers, horseback riders, mountain bikers, and 4-wheel drive enthusiasts, and opportunities for day-hikers to get away from the roads. The canyon can be approached from Borrego Springs in the south and Anza in the north. There is a permanent vehicle closure between Upper Willows and Middle Willows. From June 1 through September 30, the canyon is closed between Lower Willows and Terwilliger Valley to all use, to protect bighorn sheep watering areas.

Crossing the Pacific Crest Trail. I'd like to hike this in sections one of these days.

I was glad to see that the shelf road down into the canyon, known as the "Turkey Track" was a little rougher than I remembered from my last trip. Back before the trail was graded by the California Department of Forestry (CDF) in the mid 2000's, it was one of the most difficult trails in the park.

I wanted to stop so many times along the trail to take in the scenery and beautiful desert views, but I had to keep moving if I was to meet up with my family in Ocotillo Wells SVRA later that day.

Reaching the bottom, I finally reach the main wash of Coyote Canyon and turned downstream towards Bailey's Cabin and Upper Willows. Making a right here takes you into Horse Canyon, where the trail becomes increasingly difficult; necessitating maneuvering over and around large, embedded boulders.

Watch for this fork in the road. Adler Canyon has some nice areas to camp.

Along the trail you can spot signs of Native American occupation.

Morteros, bedrock mortar grinding holes, were used for the preparation of food.

Taking a quick look at Bailey's Cabin before starting my hike.

I was happy to see that the inside has been kept clean.

After parking my Jeep near the vehicle closure fence, I was ready for my solo hike into the remote wilds of Coyote Canyon.

I soon stumbled upon what looked like a mountain lion litterbox.

I've never seen so many pottery shards in one area. I wonder if they've been collected and then scattered around the beginning of the trail here?

Dropping down into the main wash.

In 1774, Juan Bautista de Anza, the son and grandson of Spanish frontier captains, dis­covered one of the first land routes to Cali­fornia through the Borrego Valley.  Returning in 1776, Anza led a group of soldiers, colonists, horses, cattle and mules, on an epic march of American history 1,600 miles from Culiacan, Mexi­co, up through Borrego Valley, eventually founding the Pueblo of San Francisco. Along the way was the first birth in California of a child not of American Indian descent. The event took place in what is now the Anza-Borrego Desert State Park and is commemorated with the First Child Monument.

"Near this spot on christmas eve, 1775, was born one of California's first white children, Salvador Ignacio Linares. His mother, senora Gertrudis Linares, was a member of the colonizing expedition of Juan Bautista De Anza from western Mexico to Alta California. Here in Coyote Canyon, the child was baptized on Christmas day.
Marker placed by California Centennials Commission. Base furnished by roads to romance association INC. 1950."

There was quite a bit of evidence of recent floods in the canyon.

The narrow trail into Middle Willows.

The route through the willows soon becomes muddy.

At this point, the creek flows along the path. My waterproof boots held up for awhile until the water became just too deep to avoid sloshing through it.

I thought this knife would come in handy for bushwhacking, but I really would've been better off with my full-sized machete.

At times there was just no avoiding the water flowing along the trail.

Nearing the end of Middle Willows.

Emerging from the dense vegetation at the southern end of Middle Willows.

Reaching the lower fence, which bars vehicles from continuing up the canyon. The three mile section I had just traversed is for horse, hike, or mountain bike only.

It was now time to turn around and head back up into the thick of it.

At times, it was kind of a surreal feeling, traversing this dense jungle in the middle of the desert.

Nearing Upper Willows where I started, I began climbing the hill which overlooked Fig Tree Valley. Here is the view looking back down Coyote Canyon wash.

Along the way I came across this large Native American "Yoni" carved into the rock.

More morteros at the base of the hill behind Bailey's Cabin.

Overlooking Fig Tree Valley and Bailey's Cabin, where I could see some fellow adventurist camped out. Check out their trip report here at the American Adventurist Forum.

Headed back up the Turkey Track.

One last view of the long descent into Coyote Canyon. From here I would make my way to the Truckhaven/Ocotillo Wells SVRA area where I could camp with my family for the rest of the weekend. Stay tuned for that trip report!