At the southwestern most point of the continental United States is a California state park named Border Field State Park. The park is located within the city limits of Imperial Beach in San Diego County, adjacent to the suburb of Playas de Tijuana in Mexico. The Tijuana River National Estuarine Research Reserve contains much of Border Field State Park and is an important wildlife habitat. The salt and freshwater marshes give refuge to migrating waterfowl and resident wading birds.

The park offers hiking, horse trails, surfing and birding. In recent years this area has been through many changes and seen much controversy. For some time it seemed that this park would become a victim of The War On Terror. Fortunately, it was announced earlier this year that the public will continue to be able to access Friendship Park, the historic meeting place overlooking the Pacific Ocean on the U.S.-Mexico border.

After the Mexican-American War ended in 1848, the Treaty of Guadalupe-Hidalgo required a new 2,000-mile border between the two nations. Surveying work began in October 1849 on an elevated mesa at the Tijuana River Estuary's southwest corner. A 15-foot obelisk and monument were built to mark the site, and "Monument Mesa," with an elevation of approximately 50 feet, became a tourist destination, with more than 100,000 visiting the monument in 1888, after a railroad connection was completed between San Diego and Tijuana. Though the monument marked the start of the border, it has the number 258 etched into its marble because all boundary markers along the border were numbered beginning in Texas and going westward.

The mesa and surrounding area were dedicated as a California state park in August 1971, and the monument became a national historic landmark in September 1974. The U.S. Border Patrol has a special detail of agents who come and open the gates in Friendship Park to allow the public to go into the locked area between what they call the primary and secondary fences to visit the monument, on the mesa above the beach, between 10am and 2pm on weekends. 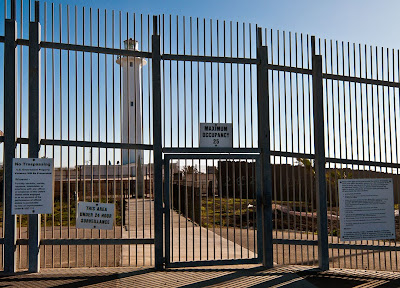 Three concrete bunkers, constructed in 1942 as part of the U.S. military's coastal defense system during World War II, sit atop Bunker Hill in Border Field State Park. Until 2008, when fencing construction began, the abandoned bunkers could be accessed by hikers in the state park but are now are off limits to the public. The bunkers, built into the ocean side of the hill east of the park's Monument Mesa, were manned until 1945 by U.S. soldiers who scanned the Pacific horizon through telescopes for Japanese ships and submarines. The bunkers have metal ladders at the top that extend approximately two stories down, where soldiers slept on metal bunks. The bunkers were part of a larger Army and Navy operation at Border Field that included 35 buildings, a barracks and a machine-gun range. 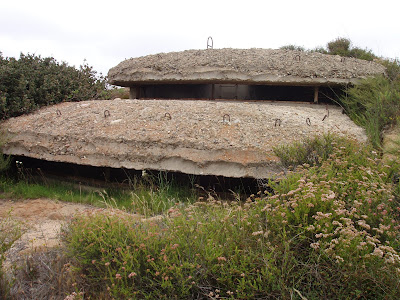 An ironic aspect of this area is that on the South side of the fence there is nothing to keep you from enjoying the beach all the way up to the fence that borders between two countries. Swim in the water, approach the border fence, or just have some fun in the sun, as many families were doing. While in the “Land of the Free” there are multiple fences, surveillance, and armed federal agents on SUV's and ATV's. If you come within 50 feet or so of the actual border fence a border patrol agent will drive down to you and tell you to keep back. There is also a secondary fence the runs about 50 parallel feet north of the actual border, that ends about 200 feet of east of the pacific ocean. The federal government took this strip of land away from the state and marks the limit of American citizen access.

Heading west on Monument Road, you will eventually arrive at the entrance to Border Field State Park at 1500 Monument Road, which is what you see below, with the Pacific Ocean exactly 1 mile to the west, directly behind the sign. The gates here are closed when the paved road that leads to the beach area of the park is flooded. On weekdays or after heavy rains, this is where you’ll drop off your car to roam the area, as long as it’s during the operating hours of the park.

From these bluffs, you can look down at the Tijuana Estuary. These wetlands were once part of a broad, deep water lagoon, teeming with fish and shellfish. Good fishing was a huge draw for ancient peoples making this area one of the first to be settled in San Diego.

Enjoying the beach and the sights across the border is really only half the fun. Finding and navigating through Border Field State Park are adventures in and of themselves.

Border Field State Park is fun and relaxing place to visit. I don't think there's another beach in Southern California where I could look in either direction along the coast and not see another soul. For some interesting historical aspects, check out the border area. Don’t go within 40 feet of the actual border and the border patrol agents should ignore you. For a more relaxing, natural atmosphere, head north. Be sure to bring a bicycle, picnic, binoculars, or a day pack and hiking shoes and enjoy your time at Border Field State Park.

Visit the California Department of Parks and Recreation site for more information on Border Field State Park.
Posted by John Graham at 2:03 AM No comments: