It was time to head on out to the desert again and pre-run a route for the upcoming BorrefoFest event hosted by Outdoor Adventure USA. I invited a small group of folks to come along and we camped at the Culp Valley Campground the night before.

In the Anza-Borrego Desert of southeastern California lies a tract of land some 20 miles wide by 15 miles long, known as the Borrego Badlands. Once undersea, the region today is a maze of hills and arroyos which, when seen close-up, reveal a hidden treasure of native palms, remote springs and mysterious concretions.

I spotted the elusive Ranchita Yeti on my way to camp!

Enjoying the campfire. All fires must be kept in a metal container in ABDSP.

Home for the night.

Heading down the grade the next morning.

Airing down along the old Truckhaven Trail.

On our way to Fonts Point. The wash was very soft and sandy.

Fonts Point is named after Father Pedro Font, a chaplain who traveled with Juan Buatista de Anza. They traveled through the Borrego Badlands in 1774 and 1775. Font kept a diary of his travels and referred to the view of the badlands as the “sweepings of the earth.” Fonts Point is regarded by many to have one of the best views within Anza-Borrego Desert State Park. The easy sandy trail is passable by most vehicles. The trail finishes at a loop that passes below Fonts Point.

It is a few steps up to the viewpoint, high over the Borrego Badlands. From here one can see the convoluted washes and eroded canyons of the badlands, Vallecito Mountains, the Borrego Valley, the Peninsular Range, Borrego Buttes, and Pinyon Mountains.

From Fonts Point we head east on Short Wash to the next overlook.

I haven't lost anyone yet! 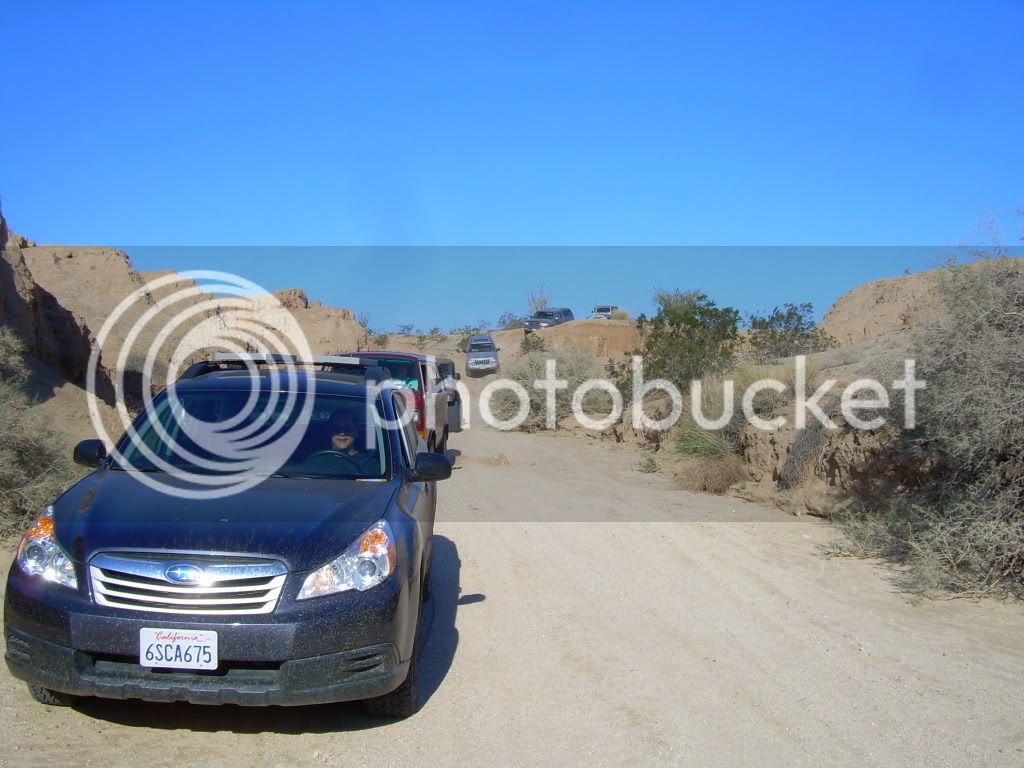 I almost stepped on this little guy.

We soon find out way to Tule Wash and the Pumkin Patch, located within Ocotillo Wells OHV Area.

The unique landscape of the Pumpkin Patch is the result of wind and water continuously eroding the surface soil and revealing globular sandstone concretions that look much like pumpkins in size and shape. Such concretions are believed to be formed by the natural cementing of sand particles to a small object such as a piece of shell, a grain of sand or even an insect. Help preserve the Pumpkin Patch and the nearby ridges where new pumpkin-size concretions grow.

Five Palms oasis in the distance.

Seventeen Palms is a well-known watering hole for the regional wildlife of the Borrego Badlands. The palms at both Oases are often green and brilliant compared to the stark and barren desert that surrounds them. These verdant oases have attracted humans for thousands of years. Nomadic aborigines, wayfaring emigrants and determined prospectors have all taken shade and water from these islands in the badlands.

Remnants of a time when grasslands, streams, and herds of camels and mammoths covered an ancient landscape, the native palms exist today only because water surfaces here. As the spring here was unreliable, early travelers with extra water would leave it in large glass jars. Thirsty visitors came to rely on the jars hidden in the shade of the palms. The desert wanderers would leave notes attached to the jars.

Today the custom of leaving messages in the prospector’s post office is carried on by visitors. In the post office barrel hidden in the 17 Palms, among the palm tree bases, lies a visitor’s log book, notes and of course, bottles of water.

From Arroyo Salado Wash we return to the historic Truckhaven Trail.

Completed in 1930, the Truckhaven Trail climbs in and out of the deep badland washes. Doc Beaty, an early settler, was instrumental in the road's creation, dragging a mule-drawn scraper through the badlands to the Truckhaven gas station to create the first rough road.

It was not a route for speedy travel, and trucks and autos took their time weaving through the weathered landscape. In 1968, the Borrego-Salton Seaway (Hwy S22) was dedicated. This paved road follows Doc's road closely, and sections of the old route remain. Since World War II, the old road has been popular with 4WD folk who wish to sample the rugged badlands terrain rather than travel the faster blacktop. This section has some loose, eroded, low-traction climbs to negotiate.

Here I am climbing up one of the self roads of Truckhaven Trail. Parts of this route used to be washed out and considerably more difficult.

Across from where the Truckhaven Trail meets Highway S22 is Calcite Mine Trail.

View from the top.

During World War II, the U.S. government commissioned specialist to inspect calcite deposits found in the wind and water carved sandstone region around this trail. Optical grade calcite crystals were processed for use in gun sights and rocket launchers.

The trail ends at the Calcite Mine area, on a flat turnaround that offers good views toward Mexico. Climbing many of the wind-pocked rocks will give a great view east over the Salton Sea.

Daniel's truck slid sideways on a section of trail coming up and received a bit of damage.

Working our way back down from the mine.

Roughest part of the trail.

After a few miles on the pavement we head south on the Cross Over Trail and then east on Arroyo Salado Wash.

Its not uncommon to come across a bit of mud or standing water in this wash.

Heading south on the long straightaway of Pole Line Road.

We soon  make our way east for a bit on the Gas Domes Trail to check out the... Gas Domes.

Wow, all this way for a couple of mud holes...

More than 85,000 acres of magnificent desert are open for off-highway exploration and recreation within the boundaries of Ocotillo Wells OHV Area. Outside the boundaries, to the south and east, large tracts of BLM land (U.S. Department of the Interior, Bureau of Land Management) are also open to off-highway vehicles. The western boundary and part of the northern boundary connect with the half-million acre Anza-Borrego Desert State Park, which is closed to off-highway recreation, but open to exploration by highway-legal vehicles along established primitive roads.

Once back into our rigs we make our way west to Tarantula Wash and take that south to Highway 78.

We soon reach the end of our route...

...but not before someone get stuck in the mud!

Here's a map of our journey through the desert.

It was a fun day spent running the trails and checking out various points of interest along the way. I'll be looking forward to getting back out there again soon.

Posted by John Graham at 12:21 PM 2 comments: Links to this post