I was happy to have my family and friends along for the 12th outing of my 52 Hike Challenge. The Cabrillo National Monument offers some of the best panoramic views of San Diego. The views alone are well worth the vehicle entry fee. In addition to these spectacular views, there is the Bayside Trail which is an easy family-friendly 2 mile round trip trail that offers an opportunity for a little exercise while soaking in  views of downtown, the Coronado Bridge, and San Diego Bay. At the top of the Bayside Trail is the old lighthouse which is open to the public to view.

Cabrillo National Monument is located at the southern tip of the Point Loma Peninsula in San Diego, California. It commemorates the landing of Juan Rodríguez Cabrillo at San Diego Bay on September 28, 1542. This event marked the first time that a European expedition had set foot on what later became the West Coast of the United States.

The area encompassed by the national monument includes various former military installations, such as coastal artillery batteries, built to protect the harbor of San Diego from enemy warships. Many of these installations can be seen while walking around the area. A former army building hosts an exhibit that tells the story of military history at Point Loma.

From the main parking lot, climb first to the old lighthouse, then start descending on the signed Bayside Trail, which first follows a quarter-mile of pavement. The remaining three-quarter mile of trail, coated with gravel, descends gradually east and finally north, losing some 300 feet of elevation. There are interpretive signs along the trail identifying many of the common plants that may be seen on the hike. The signs also highlight the natural history and military importance of Point Loma and San Diego Bay and provide a good opportunity to take a break while climbing the slope back up.

The trail is perfect for all ages and hiking abilities.

Following Autumn, Liza (with Johnny), and Dustin. I was still carrying Jackson.

At the point where the trail ends (or runs into off-limits Navy property), you’ll still be about 90 feet above the water surface. This is a good place to observe the sailboats and ships maneuvering in and out of the bay’s narrow entrance. There are also aerial acrobatics to watch, courtesy of gulls, terns, and pelicans; plus aircraft taking off and landing at the North Island Naval Air Station across the bay.

Heading back up the trail.

Overview of the Bayside Trail route. 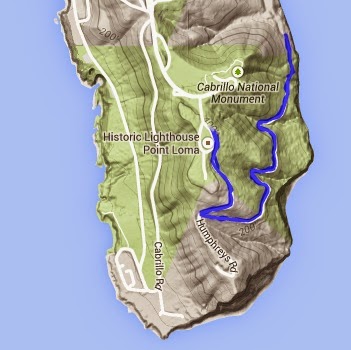 Click HERE for more information about the Cabrillo National Monument.

Modern Hiker had a great write up on this area HERE.
.
Posted by John Graham at 8:16 PM