I've been wanting to explore the depths of Carrizo Gorge for some time now. My treks out to Goat Canyon trestle would always afford me expansive views of the gorge from high above and the boulder-strewn, vegetation-chocked, twisting course has beckoned to my sense of adventure and exploration. So when I found myself with some time available on a weekend to try out some of my new overnight backpacking gear, I made plans to head out and camp somewhere within the gorge. The State Park and California Conservation Corps have been involved in a tamarisk removal project there, clearing out the invasive trees and making it much easier to traverse the canyon.

There's not a whole lot of information out there about a hiking route down the length of Carrizo Gorge. An earlier edition of Afoot & Afield In San Diego County describes this hike as a long, rugged, difficult, and memorable one, with bushwhacking, boulderhopping, and mud-stomping in abundance. However, most people who head into this area come to hike or bike along the old San Diego & Arizona Eastern Railway, built in the early 1900's.

Carrizo is a Spanish word or reeds, cattails, or tall grasses growing along watercourses around the Southwest and Mexico. Carrizo Gorge drops in elevation from 2,800 feet at Jacumba along Interstate 8, and descends to 700 feet some 18 miles to the desert floor near Bow Willow along Highway S2.

California Conservation Corps trucks parked along the north end of the canyon.

The vehicle route from Highway S2 extends about six miles into the gorge. It starts out as a wide sandy wash, eventually becoming a slightly technical, rocky trail.

Parked at the roads end. From here its all on foot.

This trip certainly provided stunning views of the natural beauty found in the desert. When I go hiking, no matter the difficulty of the trail, there is something thrilling about being out in the backcountry with nothing but my pack. Climbing up a mountain, having a close encounter with a wild animal, exploring new territory, and seeing new sights all bring a form of adrenaline rush. Even the toughest situations become great stories and proud accomplishments.

Pottery shards found along the way.

The dried up Carrizo Creek bed. I came across very little water along the creek, which was surprising since I remembered seeing quite a bit from above on my last Goat Canyon trestle hike just three months ago in November.

Without the tamarisk removal here this hike would have been much more difficult. Tamarisk, also known as salt cedar, is an exotic, shrubby tree which was introduced to the western United States for ornamental use, windbreaks and erosion control; however, it has become a dominant, invasive species.

I've seen these old rail cars along the hill side quite a few times, but never from this vantage point.

The waterline along this boulder shows just how deep the creek can get.

My first sighting of water in the gorge. This hike would be interesting during a wetter season.

More evidence of the tamarisk removal efforts. It has a very aggressive growth pattern and displaces native vegetation within watersheds and also constricts water ways. This plant absorbs a large amount of water with its long roots causing water depletion in its region.

Just before reaching the junction with Goat Canyon I found a suitable campsite under a large boulder. The full-sized sleeping bag probably made my pack heavier than it needed to be. It'll be getting a lightweight backpacking one before my next overnight trip. My pack is an old  Kelty Sierra Crest 3950 exterior frame.

My home for the  night.

I spent the evening finishing up one of my books.

The next day a explored a little ways down the gorge before heading back.

Water bladders for the work crews. I could see these from the railroad tracks above a few months ago.

It looks like this is where they keep the herbicide used to help eradicate the invasive tamarisk.

Looking up towards the tributary of Goat Canyon. The railroad trestle isn't visible from here; you need to climb up a bit further to see it. I'll save that side trip for another day.

It seemed like there was some weather moving into the area. Strong winds had battered my tent for a few hours the night before.

Oh man, this pack is so heavy! Why am I doing this again? Oh, that's right. I enjoy my solo treks because I can enjoy the beauty of silence and the sounds of nature. I like listening to the rhythm of my breath, looking at the small details of the natural world around me or loosing myself in the magnificent scenery, trying to engrave it in my memory. When I hike I want to feel fully immersed in the nature surrounding me, I like to remember how small I am. It helps me to put things in the right perspective.

California Conservation Corps crew, on their way back to work. I had passed them the day before on their way out.

Of course I packed out the one mylar balloon I found.

The CCC campsite was situated near the end of the vehicle route.

On my way out I couldn't help stopping a few times to just take in the views.

I'll be making plans for a day hike down the length of the gorge sometime soon. From Jacumba to the end of the road should be about 12 miles. The tamarisk removal project should also make this an easier trek than it would have been a few years ago.

Making a quick stop at the Carrizo Badlands overlook before continuing on down the highway and home.

Overview of my 6.5 mile round trip. 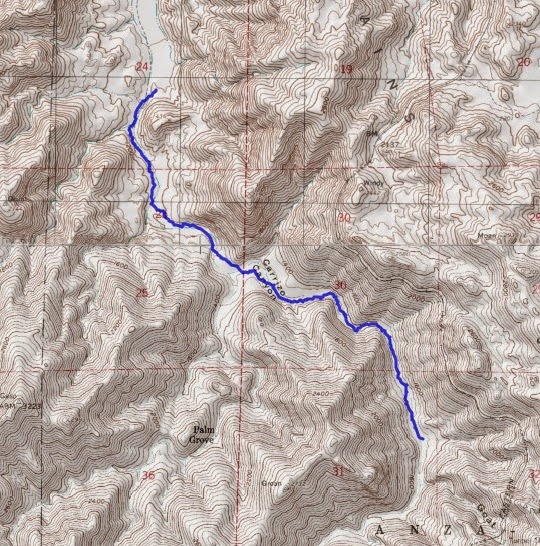 Hello! I was wondering if you could point me in the direction of where in Carrizo Gorge I can find those awesome petroglyphs? I've been going to Anza Borrego for years and I finally want to try that hike! Cheers. - Evan